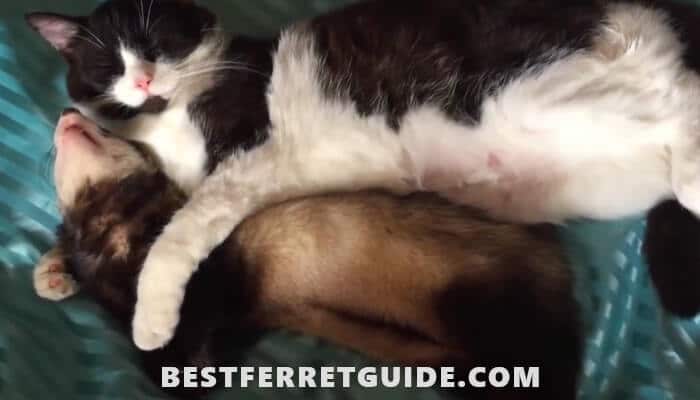 Can Ferrets and Cats Live Together?

Many of us love animals. It’s hard to imagine a boy who wouldn’t dream of having a big dog at home. And many girls dream of a cat. The ferret has also become a pet of many people. Most have pets without even thinking about their well-being. Of course, it’s great when a ferret runs around the house, a cat purrs comfortably on the sofa, and a dog guards the yard. Unfortunately, in reality, such a beastly paradise will be full of accidents. So, you should know, can ferrets and cats live together?

Do Ferrets and Cats Get Along?

Before deciding to keep these animals together, you should carefully study the experience of other owners and use the advice. You will save a lot of time and nerves. And also, you’ll protect your pets from possible injuries. It is ideal when both animals enter the house as babies and grow together. In this case, cat and ferret are guaranteed to become best friends. And the owner does not have to make much effort for their friendship. 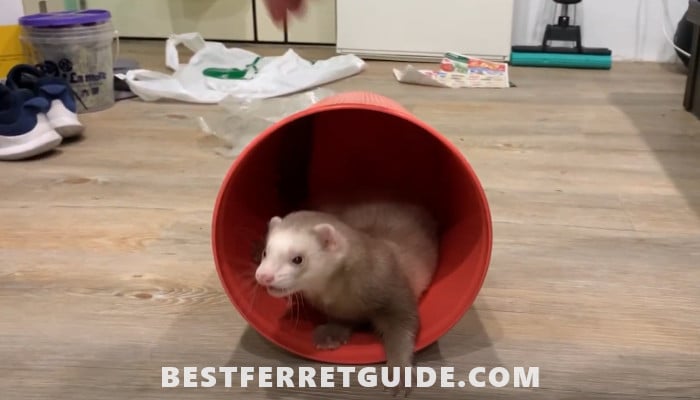 Both animals are slightly selfish as well as jealous. Sometimes jealousy and love for the owner lead to intense struggle and great harm. Therefore, the caretaker needs to balance its interests skillfully. You should avoid vigorous contact between pets. Eventually, the creatures can become friends and show the idyll in the relationship. But at first, diplomacy is necessary. What rules should you follow?

So, how to make ferrets and cats get along? Be careful and observant. In any case, try to make them friends. Be attentive with both animals, and in case of aggression, separate them.

Pros and Cons of Ferrets and Cats Being in One House

Each of the animals has a bright personality. Sometimes, I would be interested to see how such animals get along. I know for sure, if you take two pets of the same young age, they will gradually get used to each other. However, are ferrets and cats living together, if you bring a new pet to the home where another lives?

Often, the experiment of arranging for them to live together can be successful. And sometimes, the owners cannot accurately predict such a situation. In any case, such an attempt will have both pros and cons. I have gathered useful information about the positive and negative way of staying two animals in the same house. Read it in the table, so that you can find out are ferrets related to cats.

Besides, the basis of ferret nutrition should be natural meat and fish products, crumbs, as well as fresh vegetables. You can use dry and wet purchased feed. Cats eat almost the same way. According to research by The Ohio State University, ferrets eat cat food.

Of course, all animals have different characters. Therefore, some ferrets can use the cat's litter box. However, most of them will never go into a cat pot. They are too tidy and don't like the smell of other animals. But several ferrets can visit one toilet.

Ferret is a meat-eating and predatory animal. And although it is quite capable of coexisting with cats, I would not risk. The fact is that the rapid movements of smaller animals provoke the instinct of a predator. It can strangle a kitten just reflexively.

So, yes, a ferret can kill a cat, especially a small kitten. If you decide to have a little kitten with an adult ferret, this idea is objectionable. Unfortunately, the probability of a kitten death, in this case, is very high. The hunter instinct will wake up in the ferret, and it will just bite the baby.

When not to Introduce a Ferret to a Cat?

You don't have to meet two females who have just given birth to their newborn babies. At this time, the animals are too aggressive. Also, I would not recommend showing and introducing animals too close at once. If they have lived in the same apartment since childhood, they can become friends. Otherwise, the acquaintance should be gradual. You must keep the new animal for three to four days separately. Animals need to get used to each other's smells. The optimal duration of the first meeting is 15-20 minutes.

Cats and ferrets are very similar. They are both cute, fluffy creatures that want the owner’s attention. If you breed these animals, you have to give them your time and attention. But each pet has its character and temperament. If your dog or cat is calm towards you, it doesn’t mean that it may not show aggression towards the ferret.

You can see many pictures where ferrets and cats are playing, eating, and basking together. But in reality, this is not always the case. Both animals are predators. Conflicts of interest can escalate into fierce fighting at any time. Many owners keep ferrets in a cage or a separate room. My friend has two animals and allows them to be together only under supervision. So, you need to watch the behavior of your pets for a long time. It will save your nerves and health.

Hello, I’m Rafael. First of all, I would like to introduce my lovely pet ferret to you. His name is Goof. He is very smart and playful. Are you going to get a ferret too? Let’s discuss the pets’ needs. Which food and housing conditions are essential? Just read my blog and find the answers. 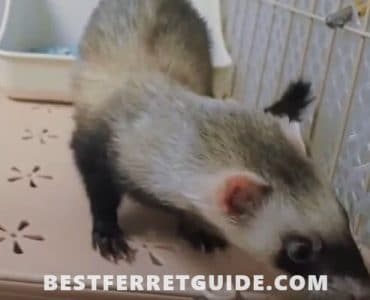 How to Train a Ferret to Use a Litter Box? 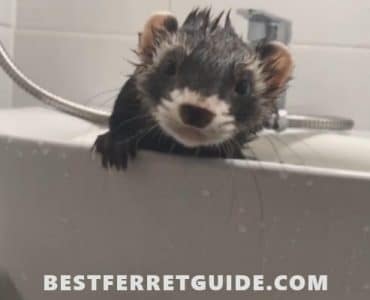 How Often Should You Bathe a Ferret?