How Long Do Ferrets Live in Captivity?

Do you think ferrets are good pets? If you adopted one of these intelligent, playful animals, you are to love your small and cute pet. It’s fun to watch a ferret running and playing, train and feed him. However, your friendly pet is to be healthy and happy. How long do ferrets live in captivity? Ferrets require a great deal of attention, time and care. Let’s think about your cherished pet’s need once again.

How Long Does a Ferret Live as a Pet?

Ferrets have been domesticated more than 2,500 years ago. The animals were mentioned by historians as the pets kept by Ancient Egyptians. They started living around humans many centuries before cats were domesticated. Additionally, a Greek play writer, Aristophanes, mentioned ferrets’ no mean abilities as thieves.

The reason for domestication is uncertain. According to the American Ferret Association, it happened earlier than in the 4th century before the Common Era. The animals might be kept to hunt rabbits. Additionally, mammals were used to keep mice population under control.

How Long do Ferrets Live in the Wild?

Average lifespan of black-footed ferrets is sometimes indicted as 1-5 years. Why can’t the nocturnal animal survive in the wild? Quite naturally, they do need ferret food, as well as your playful pet. Nowadays, the mammals are endangered. Population of prairie dogs that are main source of their diet, declined.

Here you can see more information about best ferret food!

Can a Pet Ferret Survive in the Wild?

Unfortunately, black-footed ferrets were considered extinct in 1979. What happened to them? Presumable reasons of their mortality are:

What do ferrets eat in the wild? Prairie dogs make 90% of wild ferrets’ prey. Unfortunately, they were affected by plague. According to Wikipedia, they were poisoned due to their population control measures. Therefore, black-footed bandits are endangered. In 1986, only 18 animal units left.

However, due to recovery efforts, their population is restored to 300 animals. Where do ferrets live? Their habitat is described as grasslands or prairies. Animals range through about 20 locations in the USA, Canada and Mexico. Their relatives, European polecats or common ferrets are native to north Morocco and western Eurasia. These animals have thick, dark brown fur and dark masks across their faces.

Ferrets as Pets: Pros and Cons

Quite naturally, domesticated animals are incapable of living in the wild nowadays. Therefore, ferrets as pets are illegal in California, South Carolina and Hawaii. If your pet is abandoned or escapes, the animal is in danger. Additionally, these predators can hunt, attack and kill rare native birds.

So, are ferrets good as pets? They need a lot of care. Unfortunately, these energetic animals are susceptible to several diseases, such as:

The other factors that may affect your pets’ lifespan are their environment, diet and genetics. Even though ferrets are strict carnivores, their nutrition can be based on a balanced commercial diet. Food is to contain not less than 36% protein. However, ferrets should not be kept in the cage all day through.

Do Ferrets Need a Lot of Space?

Commonly, ferrets are great pets. They are:

Do ferrets sleep a lot? They spend up to 18-20 hours sleeping. Quite naturally, it depends on their age.

How long do ferrets sleep?

Nevertheless, your curious pet needs not less than 3-4 hours a day to play. These hours can be split into shorter periods. However, you never know when your cute pet awakes and starts making a fuss. So, first of all, your pet needs a large cage. It is to be bi-level, equipped with two hammocks and a sleep sack. 3 different places to sleep are to be available. Put a litter box in the corner, but away from your pet’s eating area.

How Long Do Ferrets Grow? 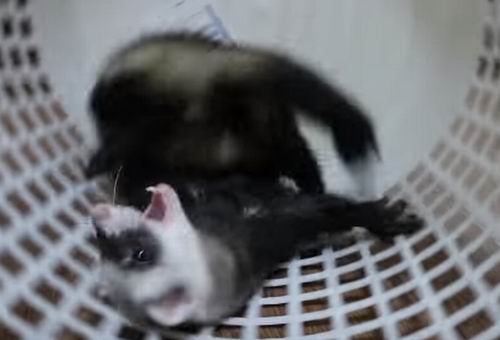 A ferret is commonly considered to be grown up at 8 months. Babies are born deaf, blind and without any fur. Quite naturally, they are nursed by their mother during the first 3 weeks. Then they need some high-protein, calcium-enriched food to be added to their diet.

Baby ferrets need a lot of care. That is, you are to ferret-proof your house or apartment. All chemical and electrical hazards are to be eliminated. Provide your pet with several ferret toys and entertainment. They are to be completely safe, suitable to tunnel and chew.

Here you can see more information about best ferret toys!
One ferret proofed room is sufficient. Kitchen, bathroom, garage and laundry represent multiple dangers to your small, curious pet. So, in your living room, you are to:

Ferrets’ needs to hide are to be satisfied with safe places to play like crinkle tunnels, cardboard boxes, shredded paper to dig in. Litter for ferrets is to be made of the safest possible materials, such as recycled paper or pellets. It should have no chemical odor to avoid allergy and irritation.

Here you can see more information about best litter for ferrets!

Many people prefer not to own a ferret. Why? The common reasons for their prejudice are that the pets:

Ferrets do smell a bit musky. A male animal might have an intense smell. It happened during mating season. Animals use this smell to attract females. However, don’t be fearful of adopting ferrets. Goof is 1-year old now. Consequently, he is adult, big and healthy. Meanwhile, he doesn’t have a very strong smell, because he is neutered. To clarify when I took him from the pet store, he was already descended. I think it was done when he was about 3 months old. 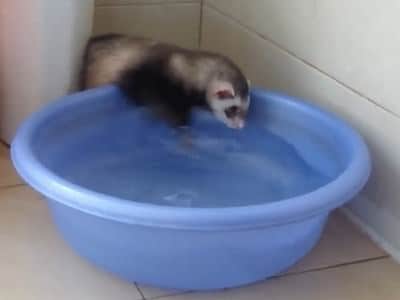 Female ferrets commonly don’t have an intense smell. However, they are to be spayed. Otherwise, the animal that doesn’t breed, suffer from anemia. She might die due to estrogen poisoning.

How Do You Make Ferrets Not Stink?

The smell can become more intense due to diseases or lack of maintenance. To avoid it, your ferret is to be:

Your pet’s teeth and ears are to be cleaned. The environment is to be safe and odor-free. So, don’t forget to clean the cage 3-4 times a week. Intense smell may be also caused by poor nutrition. Let your pet eat raw meat and top-quality food pellets.

Are ferrets easy to train? Yes, they are, but the process requires some time and patience. So, get a large litter box, fill it with safe litter and place it in the cage. Put some urine or faces there. Move the box to the place where your pet is used to urinate. Praise the ferret for using the litter box.

Do you know now, how to have a happy ferret? Your pet is to be healthy, entertained, running free in a clean, safe and spacious environment. Firstly, play with your ferret, as the animal is very clever. Secondly, provide a lot of safe and diverse toys. Subsequently, your pet keeps you entertained for hours! And most importantly, just pay some time to your cherished pet and have fun.

Hello, I’m Rafael. First of all, I would like to introduce my lovely pet ferret to you. His name is Goof. He is very smart and playful. Are you going to get a ferret too? Let’s discuss the pets’ needs. Which food and housing conditions are essential? Just read my blog and find the answers.

What do Ferrets Like to Eat and Where to Get That?

Exotic tendencies seem to be present everywhere, not excluding pet management. Thus, more and more popularity is being gained by ferrets, small but dangerous predators. In fact, the latter generates the most crucial... 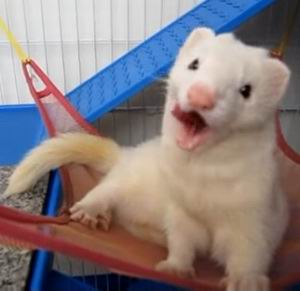 Natural ferret diet: What do ferrets eat in the wild?

Ferrets are weasel family members and carnivores so their main food must be meat. They should consume about 35% of protein and 20% of fat on a daily basis as they are a source of energy for these small creatures...

Can You Feed Ferrets Cat Food?

Are you concerned about your ferret diet? Do you want to feed your pet healthy and safe food? Sometimes you would like to save on his or her daily meal. So, can you feed ferret cat food? Which one is recommended: wet...